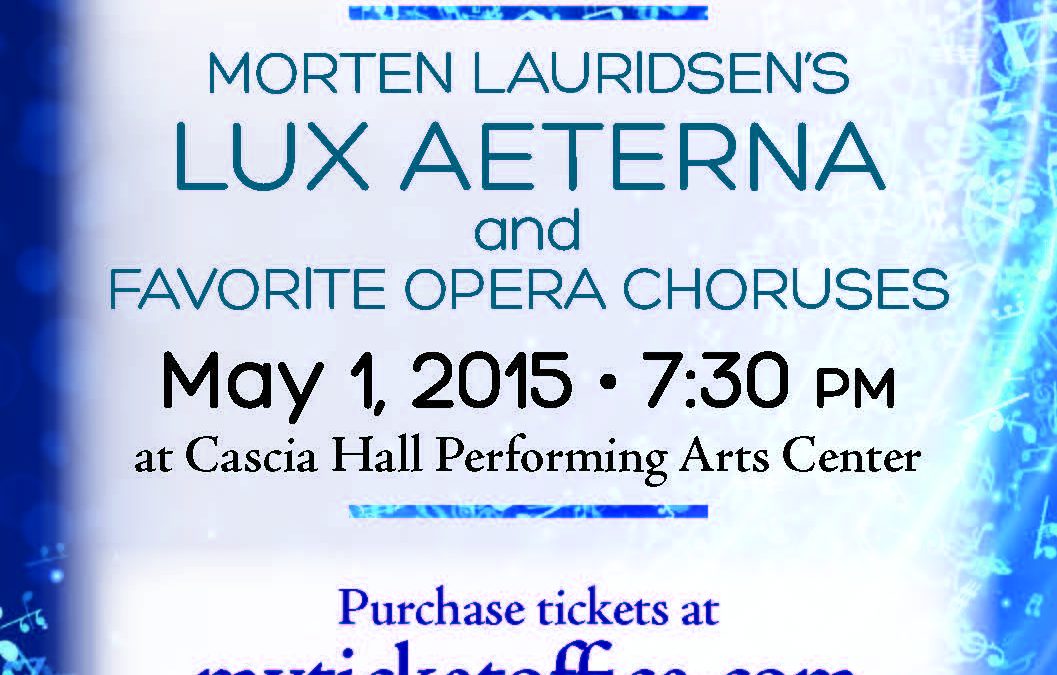 Morten Lauridsen is a contemporary composer who has received the respect and esteem of today’s serious choral conductors and audiences. NPR’s Weekend Edition with Scott Simon, Peter Rutenberg’s The First Art, and KCET’s Life and Times have featured Lauridsen and his compositions. The Wall Street Journal stated that Lauridsen’s motet O Magnum Mysterium has become one of the most-performed works of contemporary music selling more copies than any other piece in its publisher’s 220-year history. Multiple superb all-Lauridsen recordings are commercially available, along with stellar recordings of his compositions by Robert Shaw and Dale Warland. A full length documentary film of his work has received awards for capturing the essence of the composer’s style. Nick Strimple states in Choral Music in the 20th Century, “By century’s end (20th c) he had eclipsed Randall Thompson as the most frequently performed American choral composer.”

Born in Colfax, Washington, on February 27, 1943, Dr. Lauridsen studied at Whitman College and the University of Southern California. According to Brett Campbell’s article in The Wall Street Journal, “while in a singing group at USC, he was moved to compose a choral work which he then showed to the conductor, hoping to get some feedback. Instead he was told, ‘We’ll perform this next month.’” Lauridsen joined the faculty of the Thornton School of Music at the University of Southern California in 1967, following his study of advanced composition with Ingolf Dahl and Halsey Stevens. His compositional career spans forty-five years. He chaired the Department of Composition at USC from 1992-2002 and was composer-in-residence with the Los Angeles Master Chorale from 1994-2001. He divides his time between Southern California and his native Pacific Northwest, where he retreats each summer to his waterfront cabin on a remote island off the coast of Washington State.

In my conversations with Mr. Lauridsen he recently expressed his approach to his art: “My passion second to music is poetry. I read and study it constantly–every day. It is a fundamental part of my life. I have profound admiration for poets who seek deeper meanings and truths and are able to express themselves elegantly through the written word. Consequently, it has been a natural development for me as a composer to wed these two passions and to set texts to music.”

Lauridsen has not only set a variety of poems and poets to music, but he has also set poems from several historical eras in a variety of languages. Lauridsen is particularly attracted to the idea of the choral cycle, which through his craft becomes a multi-movement piece unified by both a central poetic theme by one or more authors tied together by recurring musical elements. He finds inspiration and historical precedents for his work in the music of Beethoven, Schubert, Schumann, and Brahms. Contemporary musical influences include Rorem, Copland, Barber, and the jazz stylings of Miles Davis. The poets he has chosen for his cycles include Graves, Rilke, Moss, and Lorca, as well as historical liturgical Latin texts.
Lux Aeterna (1997)

Lauridsen began work on this large-scale choral/orchestral work following the completion of Les Chansons des Roses in 1993. He put the work to the side in early 1994 to composer the Christmas canticle O Magnum Mysterium. The serenity and the uncomplicated and lyric style of the O Magnum Mysterium are continued in Lux Aeterna (Light Eternal) which is fashioned on texts from several different Latin sources, including the Requiem mass, with each movement containing a reference to “light.” This is an intimate work of quiet serenity centered around a universal symbol of hope, reassurance, goodness, and illumination at all levels. Paul Salamunovich, conductor of the Los Angeles Master Chorale for whom Lauridsen composed this cycle, considers Lux Aeterna to be one long chant. Lauridsen comments that this did not happen accidentally: “While I do not incorporate an overt reference to the single chant line anywhere in the piece, the conjunct and flowing melodic lines contributing to the works’ overall lyricism and the chant-like phrase structures creating a seamlessness throughout certainly have their underpinnings in the chant literature. Renaissance procedures abound through Lux Aeterna.”

The “Introitus” introduces a complex of themes that are used throughout the cycle. Many of the themes are constructed on the ecclesiastical modes found in Medieval and Renaissance music, especially the mixolydian and dorian modes. The harmonic vocabulary is primarily consonant, reflecting the purity and directness of Renaissance sacred music as seen in the music of Palestrina and Victoria. A subsidiary theme on ‘Te decet hymnus’ is reformulated to become the principal theme of the later “Agnus Dei.” Lauridsen’s esteem for Renaissance contrapuntal procedures is manifested in a four-part canon on “et lux perpetua”, a method of portraying musically, or painting, the textual meaning of perpetual light.

“In te, Domine Speravi” most clearly exemplifies the composer’s use of Renaissance formal procedures and textures. The masses of Josquin, for example, often contain sections of paired voices. That particular devise is used in the second movement–sopranos paired with altos, tenors paired with basses on the lengthy two-part mirror canon “fiat misericordia” at the center of the movement, incorporating the idea of self-reflection as well as a dialogue between Man and Creator. Lauridsen also employs the idea of cantus firmus in the hymn tune “Herzliebster Jesu” from the Nuremberg Songbook of 1677, stated in full in solo brass instruments, as an underpinning to the paired voice treatment. “In te, Domine Speravi” is particularly introspective, personal, complex, reflective, and thoughtful.

The central movement of the cycle, “O Nata Lux”, is an unaccompanied motet. Lauridsen inserts a pure vocal sound without orchestral accompaniment as the centerpiece of this choral cycle, underscoring the historical place held by centuries-old unaccompanied sacred motet. The ongoing homophonic texture of “O Nata Lux” tends to disguise the constant emergence of gentle but stunningly beautiful melodic fragments offered by various vocal parts. If the essence of water can be captured on canvas, surely Claude Monet approached this conceptual impossibility in his painting. Similarly, if light could be set to music, Lauridsen’s choral centerpiece “O Nata Lux” has given us this deeply felt impression and expression.

The exuberant “Veni, Sancte Spiritus” follows “O Nata Lux” as an outgoing and jubilant canticle. This movement is cast in a five-part rondo form, another form traced back to the Medieval and Renaissance periods. This lilting and joyous song in a waltzing three meter freights a large and unusual number of words, with each phrase offering vivid images of the “Spiritus.” The tempo and interpretive marking for the fourth movement is “Exuberantly”, leaving no doubt as to interpretation. “Veni, Sancte Spiritus” is paired with the earlier “O Nata Lux” to form the second of contrasting pairs in the overall architecture of the work. The first two movements form a similar pair, and the final movement contains two internal contrasting sections found in a quiet setting of “Agnus Dei” and the final “Lux Aeterna”.

“Agnus Dei” and the concluding “Lux Aeterna”, which reprises the opening section of the “Introitus”, create a musical arch, a form found in Lauridsen’s other choral cycles. Lauridsen comments: “The idea of the retrograde in music, again common in the masses of Josquin is also found here–the wind progression at the opening of the ‘Agnus Dei’ is answered by the strings in an exact retrograde several measures later. ‘Agnus Dei’ is reformulated for a third time to become the basis of a short joyful ‘Alleluia’ which also combines motivic fragments from other preceding movements.” The seamlessness of this music comes into play again as light leads to new light, as harmony merges into harmony, and as tempo modulates into new tempo. The work closes softly, as it began, with an “amen” as a benediction.

Morten Johannes Lauridsen’s middle name is not the only commonality he holds with one of his important influences. The relationships between Brahms’s Ein deutches Requiem and Lauridsen’s Lux Aeterna is cause for reflection.

There is a universal appeal and warm humanity that beg comparisons between Brahms’s and Lauridsen’s choral embrace of light, life and finitude. Plumbing deeper into the motivation for both works reveals something of the personal expression by both composers. In both instances this leads to the personal relationship between the works and the death of each of the composer’s mothers. Brahms’s mother had died years before; Lauridsen’s mother died while he was writing Lux Aeterna. This spiritual reality was a compelling factor and a driving symbol for both composers. To perform and to hear both works is to walk through some of their emotional journey.

Stylistically, both works emerge from the depths of the string section to introduce the referent opening choral statement. Both works express the extremes from the most reverent of statements to the most exuberant of lucius choral climaxes. In addition to the modal harmonies, use of canon and counterpoint, the use of historic texts and tunes, and the overall “geist” of the two choral monuments (not so much the memory of the dead as the comfort of the living), both composers unify their works through melody, which must account partially for their unusual immediacy of appeal.

Peter Rutenberg offers the following conclusion: “It is possible to hear in ‘Lux Aeterna’ the echoes of a direct line back thirteen centuries to the codification of plainchant by Pope Gregory; to the first and second Notre Dame schools under Leonin and Perotin respectively; to the paired dialogues that distinguish Josquin’s high Renaissance style; to the playfulness of early Baroque counterpoint; to cantus firmus as a Palestrina or Bach might have used them; to the big, juicy sonorities heard in Brahms’s own ‘Requiem,’ and beyond to the twenty-first century. Indeed, Lauridsen’s choice of ancient texts and the associations that come with them add an important component to this two-way bridge to the past and future. It is the coup of his genius that not only doesn’t the music sound academic or labored, but fresh and new, as in a modern distillation of essential flavors.”