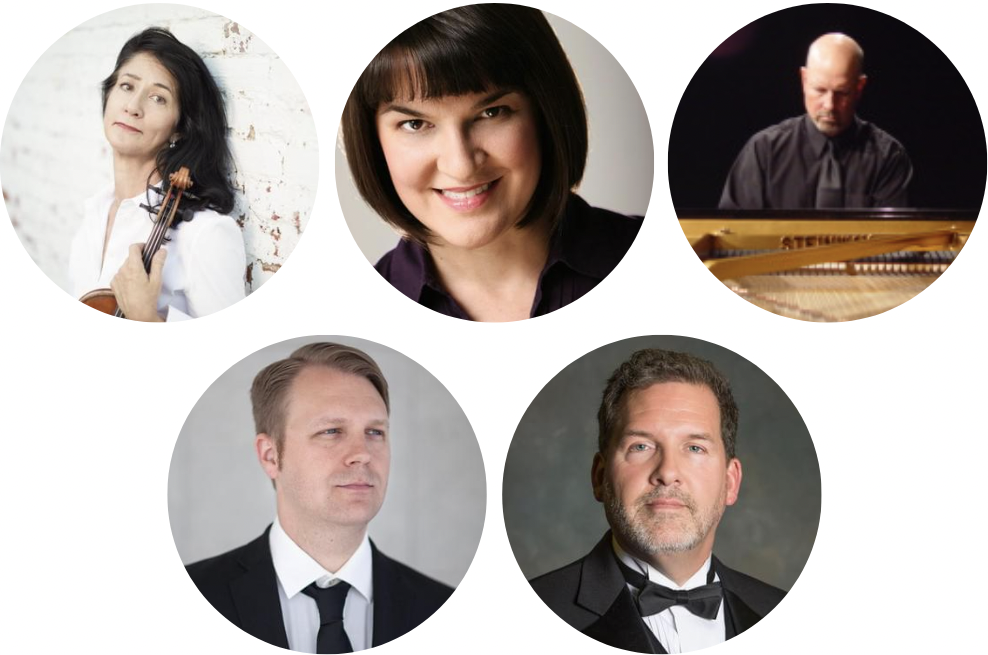 Ben A. Spalding is one of the most exciting professional choral conductors of his generation and has established himself as an exemplary conductor, creative programmer, composer, arranger, keyboard artist, and arts entrepreneur whose skills are increasingly in demand. Hailed for creating “exceptional sonic painting” (Kansas City Star) and “fresh and fiery, grand and grave” (Kansas City Public Radio) concert programs, Spalding is the Founder and Artistic Director of Kansas City’s Spire Chamber Ensemble and Baroque Orchestra, which has quickly gained a national reputation for excellence in choral performances receiving rave reviews for his work with the music of contemporary American composers as well as historically-informed interpretations of Baroque and Classical repertoire. He consistently works with the best choral artists and early music specialists in North America and was recently honored to lead Spire in riveting featured performances at the 2019 National American Choral Directors Convention and 2018 American Guild of Organists National Convention.

A champion of new music, Spalding has a deep commitment to honoring the talents and contributions of contemporary composers by being a catalyst for the creation of new compositions. He has recently directed commissioning projects with Spire giving world-premiere performances of new works by Jake Runestad, Zachary Wadsworth, John Muehleisen, and Sir James MacMillan.

Spalding is also active as a composer, regularly accepting commissions and is known for his creative keyboard and vocal improvisations. His oratorio The Great War Requiem was featured for the opening performance at the 2018 National American Guild of Organists Convention, commissioned in honor of the 100th anniversary of the end of World War I. He recently recorded the Frank Martin Mass for Double Choir along with his original works, and the music Jake Runestad, Stephen Paulus, and Sir John Tavener to acclaimed success.

He has a particular interest in promoting the music of Johann Sebastian Bach who was the consummate master of polyphony or ‘many voices’ — and this serves as the catalyst for all his musical explorations. He is an established early music leader with a thorough knowledge of performance practices for both modern and period instruments. He recently conducted and produced half of Bach’s sacred cantatas (approximately 100!!!) in one of the first Midwest performance series of its kind featuring the Trinity Chamber Artists, which he also founded. His multiple performances of Bach’s choral-orchestral masterworks, including the Easter Oratorio, B-minor Mass, St. Matthew, and St. John Passions have been lauded for scrupulous attention to detail.

Spalding received undergraduate degrees in voice and piano from Emporia State University and a Master’s Degrees in choral conducting with additional studies in composition from Rowan University. He was a student of renowned conductor and composer Z. Randall Stroope and has also studied conducting and church music with the late Sir David Willcocks in Cambridge, England.

William Roger Price appears often as soloist, composer, clinician and/or adjudicator in The United States and Europe (including Poland, Portugal, and France). One performance was broadcast by Radio/Television Portugal on six continents. In the US, he appeared twice on Performance Today, NPR’s nationally-broadcast radio program of live performances. He has performed with the Warsaw Philharmonic Orchestra, Orquestra Classica da Madeira, Solisti New York, The New York Amici, The Tulsa Philharmonic, The Oklahoma City Philharmonic, and the Bartlesville Symphony among others. For several years, Price performed as a member of Trio Tulsa, the University of Tulsa’s resident chamber ensemble. He also performs as a regular member of The Tulsa Camerata.

Recent appearances include performances at the Fryderyk Chopin University of Music in Warsaw, and in Zakopane, Poland, as well as in the Musée des beaux arts, Valenciennes, France. He was also soloist in Beethoven’s Concerto No. 5 in E flat in 2020 with The Bartlesville Symphony conducted by Lauren Green. He plans a solo recital that features the music of Chopin, Debussy, and Manuel Infante during the spring semester at The University of Tulsa.

Price has developed an international reputation as a composer of expressive and distinctively thoughtful works for orchestra, piano and orchestra, solo piano, chamber groups, choir, voice, and church ensembles. His music has been performed in the United States and many European countries incluing Ireland, Ukraine, Portugal, and Cypress. Price’s composition Mystic Images for two pianos received its European premiere in Funchal, Madeira, Portugal in December 2015, and his work “And Can it Be?” for chorus, soloists, and chamber ensemble was premiered in Bartlesville, Oklahoma. Price also conducted “And Can it Be” in a performance with the Cappella Singers and the University Symphony Orchestra of the University of Tulsa in 2018. Roger Price retired from the faculty of The University of Tulsa School of Music in 2021, where he held the position of Professor of Music (Piano and Composition) and Coordinator of Piano Studies. He continues teaching at TU in an adjunct capacity. He studied with master pianists Jose Sequeira Costa, Leon Fleisher, and Menahem Pressler in addition to the wonderful “teacher of teachers” Clarence Burg.

Cathy Venable is a Tulsa-based pianist, accompanist, organist, conductor, flutist, and mezzo. She serves as pianist for Harvard Avenue Christian Church, the Tulsa Chorale, and the Tulsa Symphony. Cathy spent 2015-2020 as Associate Conductor for the National Tour of The Sound of Music, Keyboard One/Assistant Conductor for the National Tour of the Phantom of the Opera, and Associate Conductor for the National Tour of Disney’s Frozen. From 2003-2014, Cathy made New York City her home and served as rehearsal pianist and/or pit pianist for the Broadway productions of Cinderella, Aladdin, Evita, The Light in the Piazza, Curtains, Sondheim on Sondheim, Les Misérables, The Visit, Wonderful Town, Beauty and the Beast, The Apple Tree, How the Grinch Stole Christmas, and Anything Goes. Cathy made her Carnegie/Weill Hall debut in 2008 accompanying tenor Brian Cheney. In 2012, she performed again at Carnegie/Weill Hall with pianist Steven Ryan, in the American premiere of Robin Holloway’s Gilded Goldbergs for two pianos. Cathy served as Staff Pianist/Coach for the American Institute of Musical Studies in Graz, Austria, The Institute for Vocal Studies in Paris, Yale University Graduate Opera Program, Hartt School of Music, NYU, NJCU, Light Opera Oklahoma, Salt Marsh Opera Connecticut, and Mobile Opera. Cathy received her Bachelor’s Degree in Piano Performance from Northwestern University and her Master’s Degree in Accompanying from the Cincinnati Conservatory of Music.

Dr. Kim Childs is a Professor of Choral Studies and Voice at the University of Tulsa. He sings professionally with various organizations, including Tulsa Chorale, Holy Family Catholic Cathedral and St. John’s Episcopal Church, among others. He has been a member of the Tulsa Chorale Board of Directors for 5 years.
A tenor, Dr. Childs sings regularly in recital and concert venues. He has performed with the Denton Bach Choir in the role of Evangelist in the J. S. Bach St. Matthew Passion. Other performances have included the Saint-Saëns Messe De Requiem, Op. 54, J. S. Bach’s Mass in B minor, and Ralph Vaughan Williams’ Hodie with the Tulsa Oratorio Chorus (now Tulsa Chorale). He sings frequently in the Concerts with Commentary series at the University of Tulsa; most recently, Debussy’s Cinq Poèmes de Charles Baudelaire. He has sung with a number of professional choirs, including the American Bach Soloists, Orpheus Chamber Singers, Carmel Bach Festival, Texas Choral Artists, Dallas Bach Society, the Westminster Chamber Choir in Florence, Italy, and previous seasons of the Santa Fe Desert Chorale.

Join us as we open to fall season with Love Songs, Saturday, October 22 at 7:30 pm at the TU Lorton Performance Center. Tickets and info: https://www.eventbrite.com/e/love-songs-tickets-422583718277