2017-2018 Season Announcement and Season Tickets Are Now On Sale 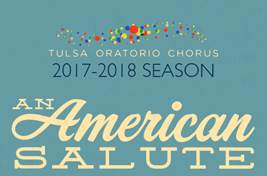 Season Tickets are no longer for sale, but you can buy individual concert tickets at MyTicketOffice.com.

To Honor: A Concert in Honor of American Veterans

“To Honor” is presented by Tulsa Oratorio Chorus in appreciation for our military service veterans for their service and sacrifice. This one-hour choral concert features songs that pay tribute to our veterans, our country, and songs that celebrate our region and the American experience.

Ian Gill, an incredible singer/songwriter/guitarist living in Dallas and an OU graduate, will be our guest star for the November 11 concert. Ian will sing songs from the great American songbook such as “American Pie”, “This Land is Your Land”, Simon & Garfunkel’s “America” with the chorus as backup. In addition, the 100 voice Tulsa Oratorio Chorus, accompanied by players from the Tulsa Symphony Orchestra, will present patriotic works including Randall Thompson’s “Testament of Freedom”, John Williams’ “Hymn for the Fallen”, “Battle Hymn of the Republic”, and, of course, “Armed Forces Medley”.

For the final concert in TOC’s season, we present Mozart’s great Mass in c minor, featuring soprano Meray Boustani, Mezzo Soprano Shannon Salyards-Burton, tenor Jeffrey Picon, Bass Kevin Eckard and organist Casey Cantwell. To round-out TOC’s year of an American Salute, we present a rare performance of 20th Century American composer Charles Ives’ The Celestial Country. This was the first professional choral work offered to the public by Ives. Both works will feature the power and beauty of the full chorus with the Tulsa Symphony Orchestra. Casey Cantwell will also be featured on the Buck Concert Variations on “The Star Spangled Banner”.

Home for the Holidays – Tulsa Symphony Orchestra Pops I

Kick off your holiday season with this family-centric blend of seasonal compositions! This night of diverse, classical, yet jazzy collections will feature the acclaimed trumpeter Jeff Shadley along with members of the Tulsa Symphony Orchestra, led by guest conductor Ron Spigelman. This intimate performance welcomes the Tulsa Harmony Project and Tulsa Oratorio Chorus for a fun-filled occasion for everyone.

TSO welcomes GRAMMY® Award-winning composer and conductor Eric Whitacre as a guest conductor and featured composer. His ground-breaking Virtual Choirs have united singers across the globe in a way in which no other composer has done. He will lead the Tulsa Symphony and the Tulsa Oratorio Chorus through a thrilling and diverse collection of his works which include Water Night, Equus, Deep Field, and Godzilla Eats Las Vegas.

If you are unable to purchase season tickets at this time, please consider making a tax deductible donation to TOC by clicking here to join the Crescendo Society.